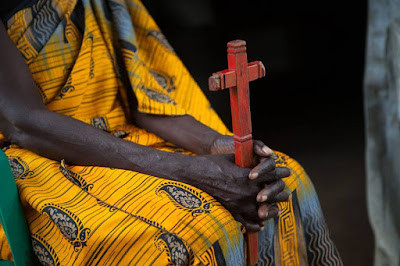 “Thank-you for not forgetting us.”

If there’s one thing I hear most often when travelling in the developing world, that’s it.

It’s said after I ask people who have received donated food, or other assistance, what they would say to Canadians who made that help possible.

Of course, they are grateful to have something to eat. But their comment goes deeper. They are glad to know someone far away cared enough to stop what they were doing, even for just a few minutes, to think about those who are hungry.

Tomorrow, June 10, Christians in Canada have an opportunity to join Christians around the world in remembering people in Africa who are facing food shortages. That’s when they are invited to be part of the second annual Global Day of Prayer to End Famine.

The invitation comes from the All Africa Council of Churches, a fellowship of Protestant, Anglican, Orthodox and Indigenous churches in Africa with a membership over 120 million Christians across the continent.

In a letter from the Council, issued with support from the World Evangelical Alliance and the World Council of Churches, Christians from outside of Africa are being asked to pray, reflect and act to raise awareness of the food needs facing millions of people in places like South Sudan, Somalia, Nigeria and Yemen.

In the letter, the Council notes that, after years of progress towards ending world hunger, “the numbers of hungry people globally have started to climb—a startling reversal less than three years after global leaders collectively agreed that achieving the ambitions of the Sustainable Development Goals demanded that no-one be left behind.”

One of the main reasons for the rise in numbers is conflict, which is “making millions of our sisters and brothers hungry, homeless and vulnerable,” they state, adding that children and women are often the most affected.

And yet, the Council notes, while the world has “more than enough resources and food for all . . . less than 50 percent of needed resources to address these challenges are being collected.”

For these reason, they ask Christians around the world to stand in solidarity with Christians in Africa “to support them to realize a future free of extreme poverty, hunger, and violence.”

To date, 135 churches, denominations, church-based NGOs and other organizations around the world have signed on to signal their willingness to invite their members and supporters to pray, remember them, and perhaps donate to help those who are facing hunger. This includes some churches and organizations in Manitoba.

But what to pray? That’s always a challenge. It’s hard to know what to say. Sometimes our prayers can feel hopelessly inadequate when faced with such overwhelming needs.

To help, The Global Day of Prayer website offers links to prayers and other resources, such as the prayer below from Canada.

Loving God,
we bring before You the people of Africa who are currently experiencing famine and personal hardship.
We do not know them personally,
but we share a common bond as human beings, created in Your image.
Our hearts go out to them,
as many find themselves in desperate circumstances—
without food, without shelter, without hope.
There seems to be so little that we can do for them.
The pictures on the news are difficult to watch,
and we’d often rather look away.
But you have called us to be your hands and feet in our world;
to speak and act for those who cannot speak and act for themselves.
So we pray that Your Holy Spirit would prompt us to action.
Give us generous hearts,
to share freely with those who have nothing.
Give us courage to speak on their behalf
to those who are shaping our country’s response.
Give us perseverance,
to continue to pray fervently for their welfare.
Grant us Your mercy, God,
as we seek to live out our calling as Your disciples.
We pray this in Jesus’ name. Amen.
It’s a great prayer for the Global Day of Prayer to End Famine, or for any day when people want to remember those who don’t have enough to eat.

I know they will appreciate being remembered.