Faith and Technology, or Alexa, Apps, AI and the Amish 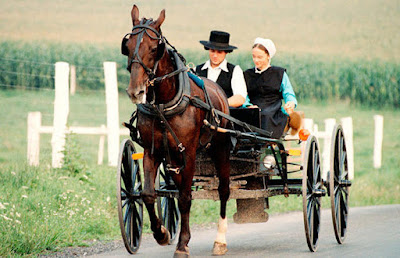 Alexa, the new voice-activated assistant from Amazon, can do many things for its owners—shop, read the news, tell the weather, answer almost any question.

And now it can also pray.

Or, at least, it can in the United Kingdom, now that the Church of England has created a way for the device to read the prayer of the day or a grace before a meal.

In addition to prayer, people can also ask Alexa about God, what it means to believe in God, or to point to nearby local churches.

The Church of England’s use of Alexa is in response to declining attendance at Sunday morning services. It’s an effort to reach people where they spend much of their time—online.

This way the Church of England isn’t the only faith group finding new uses for technology.

Muslims have access to a number of apps to help them observer prayer times, find local halal grocery stores or restaurants, or read the Quran. Other faith groups can also access their scriptures and devotionals on their phones.

These are all fine and good. But as technology becomes more sophisticated, are their causes for concern?

Earlier this year, Pope Francis raised that question in an address to the World Economic Forum. He was thinking particularly about the rise of Artificial Intelligence, or AI, and the impact it could have on the poor.

“Artificial intelligence, robotics and other technological innovations must be so employed that they contribute to the service of humanity and to the protection of our common home, rather than to the contrary, as some assessments unfortunately foresee,” he said.

The Pope isn’t the only one wondering about AI; last fall a group of primarily Protestant computer scientists tackled the question of a Christian response to AI.

“Just as Christians seek wisdom and offer leadership on other basic issues, we also need ways to understand AI,” they wrote on Medium.

In a series of posts, they offer thoughts on AI and relating to artificial persons; work, creative and purpose; counseling and spiritual care; and sin, justice and religious freedom.
One issue of concern to many people of faith is technology and violence. For example, should Christians support the use of AI if it helps the military improve its ability to kill people?

The question became real at Google in May when it became public that the company is helping the U.S. military analyze drone footage. The revelation prompted about a dozen Google employees to quit on ethical grounds.

Another area of concern is the effect AI will have on employment. If people of faith believe work conveys meaning and dignity for people, what’s our response to new technologies that could cost millions of people their jobs?

Faith groups who are wrestling with these questions could consider an unlikely source for some answers: The Amish.

That’s the thinking of Jameson Wetmore, a researcher at Arizona State University. In an interview in Quartz, he described how the Amish address issues arising from new technologies.

While most people today see technological progress as inevitable and positive, the Amish carefully consider how each new technology “will change their culture before embracing it,” he says. “And the best clue as to what will happen comes from watching their neighbors.”

Or, as he put it, the Amish are watching us—they are using the non-Amish world as an experiment.

When we adopt a new technology, they observe its effects and “then they decide whether that’s something they want to adopt themselves,” he says.

For the Amish, the key factors are whether the technology in question adds to community life and neighbourliness, or diminishes it, along with its effect on the happiness and well-being of users.

Although Amish communities can treat various technologies differently, the two that have consistently failed this test for all of them are TV and cars.

For Wetmore, the Amish show us that technologies aren’t simply “piles of metal and wire and computer chips, and really the only thing that matters is the people who use them . . . when any technology is designed, it is usually designed with purpose and goals. Values underlie those purposes and goals.”

That sounds like a good starting point for a faith-based discussion to me.

From the June 2, 2018 Winnipeg Free Press. Also see Can Robots Love God and Be Saved? on this blog.

Email ThisBlogThis!Share to TwitterShare to FacebookShare to Pinterest
Labels: religion and technology