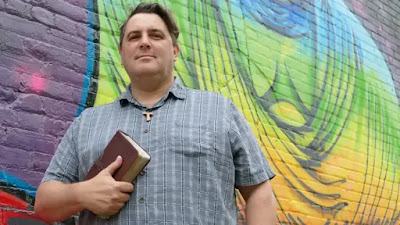 The last time I interviewed Jamie Arpin-Ricci, pastor of the Little Flowers Community Church in Winnipeg’s West End, he was helping lead a campaign to say “sorry” to people in the LGBTQ* community.

It was 2013, and he planned to stand along the route of the Pride parade as part of a North America-wide I’m Sorry campaign to apologize for how the church has treated gay people throughout history.

"As Christians we have done wrong, and we want to say sorry," he said at the time.

"This is one way of making an unqualified apology and publicly committing ourselves to do better."

Five years later, Arpin-Ricci still regrets how people in the LGBTQ* community have been treated by the church. But now he’s resolved to do more than apologize.

Around the time of the I’m Sorry campaign, Arpin-Ricci says he was working through his own beliefs and attitudes about sexuality.

“I was beginning to question whether I could be fully affirming,” he says.

While opposed to reparative therapy, the idea that gay people can be made to change, he still held a traditional view of marriage as being between a man and a woman.

But after spending time studying the Bible, and talking to members of the LGBTQ* community, he came to see same-sex marriage as a positive thing.

“I spent many years studying the Bible and pastoring LBGTQ* people,” he says. “I came to see that if a relationship is entered into that is God honouring, where is the harm?”

He also asked himself what Jesus would do. “I developed a Christocentric view of the Bible,” he says. “It impacted lots of things in my faith, including view of sexuality.”

But the journey was also a personal one for the 41 year-old married father of two; this year he acknowledged and publically shared he is bi-sexual.

As a teenager growing up in Rainy River, Ont., Arpin-Ricci knew there was something different about himself—he was attracted to both women and men.

For someone who was part of an evangelical church, the realization led to many painful experiences with fellow-Christians, many of whom had very negative—and horrific—things to say about same-sex attraction.

“When I was a teen struggling with sexuality, it was incredibly hurtful and damaging to hear those things,” he says.

The experience caused Arpin-Ricci to squelch his true identity for many years. But after the Pulse night club shooting, where 49 LGBTQ* patrons were killed and over 50 wounded, he decided he needed to be honest about his own sexuality, and speak out.

“I want to send a signal that it is safe to come out,” he says of those who, like him, struggled with their sexuality when they were young.

What gives him urgency is how many young  LGBTQ* youth harm or kill themselves today—and that studies show those most at risk are the ones who are churchgoing.

He remembers how lonely it felt when he was young and trying to deal with who he was in a hostile religious environment.

“The sense of being alone was overwhelming,” he says, adding he doesn’t want anyone else to feel that way.

But something he wants to make clear is that even though he is bi-sexual, he is happily married and committed to his wife, Kim, and she is supportive of his coming out.

He believes it has helped their marriage.

“As I embrace who I am, I have become a better husband, more authentic in who I am, I can say things openly, not have taboo areas of my life I can’t talk about,” he says.

And yet, his coming out is not without cost. The couple are missionaries, and depend on donations to do their work. They have received hate mail, and recently some key donors have stopped giving.

But he won’t let these things stop him.

“The church needs to have this conversation,” he says, noting that the longer it delays dealing with the issue the more lives are at risk.

“And the best conversations take place in the context of genuine relationship, not reduced to theological debate,” he adds.

“Take time to listen, and resist the impulse to jump to judgement. When that happens, people become fodder in a war.”

Read Jamie’s coming out story on his blog. Read an interview with him on CBC.