Sexual abuse in U.S. evangelical churches "every bit as prevalent" as what happened in the Catholic Church 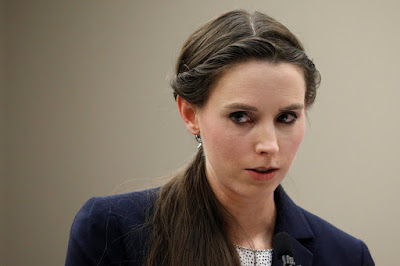 Like so many others in the U.S. and Canada, I was profoundly moved by Rachael Denhollander’s powerful victim impact statement at the trial of convicted sexual abuser Dr. Larry Nassar.

But as I listened to Denhollander—the first woman to go public with accusations against the former USA Gymnastics national team doctor—one short phrase caught me.

In a list of things she lost through the experience, she said, was “my church.”

Lost her church? What was up with that? I wanted to know more.

Since messages between people who aren’t friends on Facebook disappear into a junk file, I didn’t really expect a reply.

But she answered back.

“I would be happy to speak to you,” she wrote.

It wasn’t long into our conversation last Monday before I understood why.

For Denhollander, a deeply committed evangelical Christian, the way evangelical churches are letting down victims of sexual abuse is deeply disturbing and profoundly disappointing.

Churches, she believes, should be havens for people who have been abused. All too often, however, the opposite happens; instead of protecting children, churches enable and protect their abusers.

She wants to see it stop.

Denhollander was first abused by Nassar in 2000. She was 15 years-old.

She was not the first victim; she discovered later he had been reported by four other gymnasts before her. But nothing was done to stop him.

She was sure she wasn’t the only victim. “It was clear to me at 15 that this was something Larry did regularly,” she says.

She told someone in authority about her abuse in 2004. Again, nothing happened.
It wasn’t until she went public in 2016 that a tidal wave of accusations joined in a chorus against the now-disgraced and convicted doctor.

While angered by the abuse she suffered, she was equally upset that Nassar’s other victims weren’t believed or ignored.
So when her own church in Louisville, Kentucky began to actively support a prominent national evangelical ministry network that had been accused of covering up child sex abuse, she was very concerned.
“My own church was actively supporting a ministry whose leaders had been very credibly accused of failing to report child predators,” she says.

“They did not report him [the abuser], did not put any restrictions on him. He was allowed to continue abusing.”

She and her husband, Jacob, brought their concerns to leadership at their church. It went nowhere.

“This caused division between me and my church,” she says. “Even though this was one of the most well-documented cases of institutional cover-up I have ever seen, there was a complete refusal to engage.”

Instead, some of the leaders at her church raised questions about the quality of her character, and about her faith.

So in 2016, when Denhollander decided to go public with her story of abuse, she did not expect her church to offer much in the way of help.

“We did not receive any support from the church when my story came out,” she says.

Her previous advocacy for other victims was “wielded like a weapon” by some of the church’s leaders in an effort to discredit her accusations against Nassar, she says.

“They essentially said I was imposing my own perspective or that my judgement was clouded,” she shares.

Within six months, she and her husband left the congregation.

“We were told it wasn’t the place for us,” she says.

In the two years since she went public, Denhollander has learned that the problem of child sexual abuse in American evangelical churches—and the subsequent cover-up—is more widespread than she thought.

In conversations with experts in the field, she was told that sexual abuse in U.S.evangelical churches is “every bit as prevalent, if not worse, than what happened in the Catholic Church.”

The problem is compounded by an unwillingness to hold abusers accountable and report their abuse, she adds.

“If you talk to prosecutors, to trauma counselors, and to activists on behalf of victims of sexual assault, they will all tell you that the Catholic Church and the evangelical church are two of the most difficult groups to deal with,” she states.

Instead of supporting victims, like people would expect, “they are supporting the perpetrators,” she says.

Why does she think so many evangelical churches are reluctant to report abusers in their midst?

A big factor, she says, is “institutional protectionism”—churches believe that they have to protect their reputations as being holy, and not like the world.

This is especially true when ministries, churches and leaders that are prominent on the national scene are involved.

The problem with this approach, she says, is that perpetrators can continue their assaults.

“Research shows the average pedophile is reported approximately seven times before he’s finally caught,” she says. “The average number of victims a pedophile has is about 250.”
Not holding enablers accountable “is the foundational reason for why we have such an epidemic of sexual abuse, particularly child sexual abuse,” she says.

“People don’t understand that if you do not treat the failure to report sexual assault as a very serious thing, it creates a system where perpetrators know they are safe to prey on children.”

The result, she says, is that churches are often “one of the least safe places to acknowledge abuse.”

For her, that’s a tough admission to make.

“That’s a hard thing to say, because I am a very conservative evangelical, but that is the truth. There are very, very few [abuse victims] who have ever found true help in the church . . . It is with deep regret that I say the church is one of the worst places to go for help.”

Despite all this, Denhollander—a lawyer and mother of three children, with a fourth on the way—has not given up on her faith.

Today she and her family have found another church where they “feel blessed.” And she wants it to be noted that some people at her old church have apologized for how she was treated—something she is grateful for.

As for the wider evangelical church in the U.S., she still believes it can be better.

The church, she says, “should be the safest place” for those who have been sexually abused.

“Christ is the greatest hope, he is the greatest refuge for someone who has been wounded and betrayed. He defines what trust and security and love and compassion should look like for sexual assault victims.”

As for her own experience, she says that sometimes “obedience costs,” especially if you have to “speak out against your own church community . . . it will cost to stand up for the oppressed, and it should.
“If we’re not speaking out when it costs, then it doesn’t matter to us enough.”

Does this ring true for Canadians, too? Your comments are welcome on this blog or by e-mailing me at jdl562000@yahoo.com
From the Feb. 10, 2018 Winnipeg Free Press. One source of information for how churches and other faith groups can respond to child sex abuse is Dove's Nest.
Posted by JDL at 8:15 AM