A Mystery of Titanic Proportions 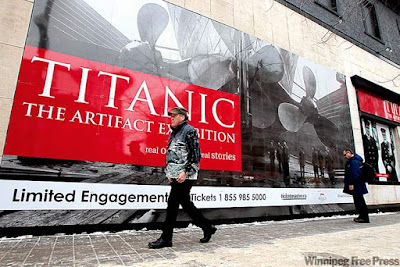 I wrote this column in 2011, when I still worked downtown.

Every weekday morning, when I go to work, I am confronted by the mystery of life.

My life, to be precise.

It happens when I get off the bus downtown and pass by the Titanic posters at the MTS Centre Exhibition Hall.

For many, the photos of the great ship are just that: photos. For me, it prompts a deeper question: Why am I alive?

It's not an academic exercise; if not for a missed reservation for passage on the doomed ship, I might not be alive today.

The story goes like this. In 1911, my grandfather, also named John Longhurst, emigrated from England to Canada. Like many other emigrants starting a new life in a new country, he left behind his fiancée, Alice Bond—my grandmother.

The plan was for him to become established in Canada, then return to England so they could marry.

Early in 1912, he came back and they were married. Apparently, John was a bit of a romantic; he wanted to do something special for his new bride. And what could be more special than booking a honeymoon passage on the maiden voyage of the Titanic?

But he was too late; the ship was full. Instead, he made a reservation on the SS Megantic, arriving in Quebec City six weeks later.

Had he been in time to book passage on the Titanic, it is likely that one, or both, would have died.

Because of a missed reservation, I am alive.

When it comes to averted tragedy, most people don't have a story as dramatic as the Titanic. But everyone can recall near misses of one sort or another, times when the course of our lives could have been completely altered,  or ended.

When that happens, many people offer thanks to God, Allah, Jehovah, their lucky stars or whatever universal power they believe in.

But sometimes another thought creeps in: Did a higher power really help us avoid that tragedy? Was it all planned to happen that way, right from the beginning? Or was it just luck or blind chance?

In my case, did God know the Titanic was going to sink, and so prevented my grandfather from getting a ticket on the doomed ship? Did he have a plan that involved not only John and Alice, but also my father, myself and my kids—all the way down the line?

And if that's the case, why did he keep John and Alice off the doomed liner, but allow so many others to sail away to their deaths?

Those are big questions on weekday mornings, especially before the first cup of coffee. And I'm not sure I have good answers.

One person who has given this a lot of thought is Bruce Epperly, a process theologian and author of the book Process Theology: A Guide for the Perplexed.

In a nutshell, process theologians like Epperly believe God does not, and cannot, fully determine the experience of any person on the planet.

In this view, God does not determine the most important details of our lives. Instead, the future is as open for God as it is for us; neither knows exactly what will happen next.

For Epperly, this doesn't diminish God. Instead, it makes God "more alive, creative, and active than a God who has chosen the future in its entirety. A God to whom new things happen can respond to our prayers in ways that make a difference, operating within the causal relationships of the natural world."

This is an "open-source, open-system vision of the universe in which God and the world exist in a dynamic, growing and evolving partnership," he adds.

If Epperly is right, this means God didn't ordain for the Titanic to hit an iceberg and sink that terrible night in April 1912.

He didn't plan for John and Alice not to be able to get passage on the liner, nor for all those people to die.

God may not even have known the ship would sink at all.

Epperly's view is not conventional. But it's catching on as more Christians wrestle with the issue of suffering and pain in the world.

Is everything preordained, from beginning to end? Or are we, in Epperly's words, engaged in a dynamic relationship with God where we both react to events, both good and bad?

I certainly don't have answers to those questions. All I know is when I get off the bus each morning and see those photos of the doomed ship, I face a mystery of Titanic proportions.