Sunday Stalwart, Diversely Devout or Spiritually Awake: What Type of Religious Person Are You? 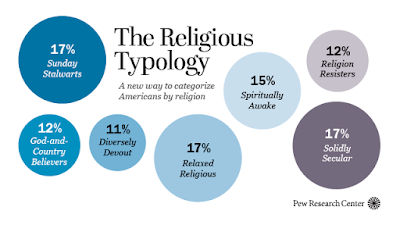 Are you a Sunday Stalwart? Diversely Devout? Relaxed Religious? Or Solidly Secular?

Those are some of the new categories being proposed by the Pew Research Centre in the U.S. to categorize believers in that country.

The new categories—or “typologies,” as Pew puts it—are based on answers people provided to a survey it conducted last December.

By using the new categories, Pew wants to better describe the way people believe and behave not only within faith groups, but across religions. People in the seven groups can be found in any faith tradition.

Of the seven categories, the Sunday Stalwarts are the most religious group. These are people who not only actively practice their faith, attend services weekly, and pray daily. Seventeen percent of Americans fall into this group.

God-and-Country Believers (12%) are less active in church groups or other religious organizations, but hold many traditional religious beliefs and tilt right on social and political issues.

The Diversely Devout (11%) are people who believe in traditional ideas about God, but also consult accept other spiritual practices like consulting psychics and believing in things like reincarnation and spiritual energy.

The Relaxed Religious (17%) believe in traditional ideas about God, and four-in-ten pray daily. But fewer of them attend religious services or read scripture regularly, and they almost unanimously say it is not necessary to believe in God to be a good or moral person.

Spiritually Awake people (15%) believe in God or some higher power, though many do not believe in the traditional ideas about God. Relatively few attend religious services on a weekly basis.

Religion Resisters (12%) believe in some higher power or spiritual force, and many consider themselves to be spiritual but not religious. However, many express strongly negative views of organized religion.

The Solidly Secular (17%) are the least religious of the seven groups. They are relatively affluent, highly educated adults, and mostly white and male. They tend to describe themselves as neither religious nor spiritual.

Pew notes that outside of the Sunday Stalwarts, relatively few Americans—even those who otherwise hold strong religious beliefs—frequently attend religious services or read their scriptures.

Instead of attending religious services, Pew observes that many Americans find fulfillment from different sources such as “their families, friends and careers, but also from being in the great outdoors, taking care of pets, listening to music and reading.”

Since this study is about Americans, it’s hard to know how well these new typologies would apply to Canada—the God-and-Country category, in particular, might not fit as well north of the border.

I also suspect that, in our much more secular Canadian society, there might be more people in the Religion Resisters and Solidly Secular categories in this country.

All the same, it would be interesting to see how people across different religions would share some of the same characteristics when it comes things like belief in God, attendance at services, reading scriptures, or praying.

What category are you in? You can find out for yourself by taking the quiz on the Pew website.
Posted by JDL at 7:05 AM No comments:

Email ThisBlogThis!Share to TwitterShare to FacebookShare to Pinterest
Labels: religiosity 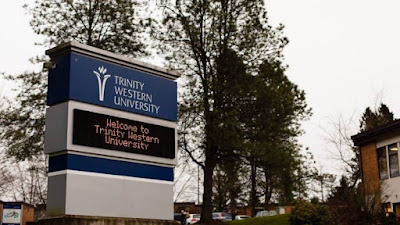 It was big news when the Supreme Court denied an appeal by Trinity Western University (TWU) to have a decision against its law school overturned because of the university’s stance against homosexuality.

It was even bigger news when the school made a change to that stance.

In June, the Court ruled that the law societies of British Columbia and Ontario could refuse to accredit TWU’s proposed law school because of its community covenant.

The chief objection by the societies was how all students were required to sign the covenant, which included a provision that students “abstain” from “sexual intimacy that violates the sacredness of marriage between a man and a woman.”

In making the ruling, the Court agreed with the societies that the covenant discriminated against LGBTQ students.

For many Christians in Canada, the decision was evidence of how the standing of the church in Canada has changed, as well as a blow against religious liberty.

Then, in August, TWU did something unexpected when it decided to make signing the covenant voluntary for students.

In an interview with Faith Today, Canada’s leading evangelical publication, TWU President Bob Kuhn emphasized that the covenant itself had not been changed—it still exists, and faculty and staff have to sign it annually.

By making it voluntary for students, he stated, the school was clarifying that it “does not discriminate in terms of enrollment for any person from any belief or any LGBTQ or other group.”

He went on to say something that also caught some people by surprise: TWU already has LGBTQ students, and many of them say they feel “welcome and embraced and supported” at the school.

They also say it is easier to come out as gay at TWU than at public universities—also quite a statement for him to make.

After hearing Kuhn’s comments, I immediately wondered about the reaction. Would donors cease giving? That’s the big fear church-related organizations have when they think about changing their stance on LGBTQ.

In the back of everyone’s mind is what happened four years ago to World Vision USA when it changed a policy related to LGBTQ.

It was in 2014 that the organization altered its employee conduct manual to recognize same-sex marriage as being within the norms of “abstinence before marriage and fidelity in marriage.”

Then-president Richard Stearns explained to the U.S. evangelical magazine Christianity Today that, in making the change, the organization was not endorsing gay marriage.

Instead, he said, World Vision USA was simply recognizing that gay marriage was like other issues churches that support it disagree on—things like divorce, remarriage, modes of baptism, female clergy.

The change simply made the policy “more consistent with our practice on other divisive issues," he said.
The response was quick and very negative. About 5,000 child sponsors cancelled their donations, a loss of over $1.2 million for the organization. Major evangelical leaders in the U.S. also loudly criticized the move.
Within two days, World Vision USA reversed course.
Now that TWU has done something similar, would it suffer the consequences? I contacted them to find out.

According to James Tweedy, TWU’s director of marketing, “we haven’t experienced a negative impact on donations. In fact both donations and enrollment continue to be stronger than in prior years.”

Overall, he added, “the response has been largely positive,” although he acknowledged there have been some criticisms based on the mistaken belief the school has eliminated its covenant.

Thinking about the TWU experience makes me wonder if there aren’t some lessons for other church-related organizations facing a similar challenge.

Today, many church-related organizations find themselves in a difficult place. They know they need to modify policies about LGBTQ issues, or face losing a younger generation that is generally more open to gay relationships—their future supporters.

But they worry if they do then their older donors—the ones who donate the most and keep them afloat today—will stop giving.

Maybe the TWU experience shows those fears are overblown—in Canada, at least.

If a thoroughly evangelical school like TWU can modify its stance on LGBTQ, perhaps other church-related organizations can do the same.

Maybe TWU has done them all a great service by opening the door, and not experiencing a negative response.

Based on a column first published in the Sept. 8, 2018 Winnipeg Free Press.

"Awesome, a once in a lifetime experience": Winnipeggers React to Meeting President of Church of Jesus Christ of Latter-day Saints

If you are Roman Catholic, imagine what it would be like to meet the Pope in person.

If you are Muslim, imagine going on the Hajj.

If you are Jewish, imagine praying at the Western Wall in Jerusalem.

Some members of the Church of Jesus Christ of Latter Day Saints in Winnipeg don’t have to imagine what something like that would feel like. They know because they met the leader of their church—a man they regard as a prophet of God—last month.

Over 1,300 people came to hear president Russell Nelson on August 17, with some lining up over four hours before the event started.

The 17th man to hold the position, the 93 year-old Nelson is considered by the faithful as God’s representative on earth.

His visit is only the second time a president of the church has come to Winnipeg. The other was Gordon Hinckley, who came in 1998.

Nelson came to Winnipeg to visit the church’s new temple, which is under construction in the southwest part of the city. It is scheduled to open in 2020.

“As the temple is prepared for the people, the people need to prepare for the temple,” he told the gathering, going on to describe ways members of the church need to become “temple ready.”

Prior to coming to Winnipeg, Nelson was in the news about changing the name of the church from Mormon, which is commonly used, to its official name: Church of Jesus Christ of Latter-day Saints.

In the few minutes I had to speak to him before his address, I asked about that decision.

By announcing the change, he said he was trying to “correct an egregious error” that had taken root over generations.

He added he “loves” the prophet Mormon, from whom the name is derived.

But “this is not Mormon’s church,” he said. “I think Mormon himself would be embarrassed if people thought this was his church.”

“I’m trying to make clear this is his [Jesus’] church,” he said, noting that Jesus had impressed this on his mind.

The instruction he received is “an amazing revelation,” he stated, and it will be “a wonderful thing” for the church.

At the same time, he acknowledged that changing the name won’t be easy. But when “we know what the Lord wants, we move in that direction,” he said.

For members of the church in Winnipeg, it’s clear his visit was a memorable event.

“This is a once in a lifetime chance for people in Winnipeg to see him,” said Ken McInnes. “It’s a very special moment.”

“It was a wonderful privilege to have him come here, to remind us of what we need to do to prepare for the Temple,” added his wife, Silvia.

“We see them on TV [the presidents], but it’s different to be in the same room.”

Not only Winnipeggers were there. Dhafne Rasera is from Brazil.

“It was an amazing experience,” said the University of Manitoba student of her first time seeing a prophet. “I felt the Holy Spirit. It was powerful.”
Fiona Nauna of Papau, New Guinea is doing her mission service for the church in the city.

“It was awesome, a once in a lifetime experience,” she said, adding “I am the first one in my family to see a prophet in person.”

It was the same thing for Baley Godderidge of Logan, Utah, also doing her service in Winnipeg.

“I feel very lucky, to be in the right place at the right time,” she said, laughing at the irony that someone who lives near Salt Lake City—the headquarters of the church—would need to come to Winnipeg to see its president.

Added Allan Robison, a long-time member of the church in Winnipeg: “This is the highest honour, to have him visit us . . . it’s thrilling to me whenever I can hear a prophet.”

As someone who grew up in a church tradition that doesn’t have a pope or bishops, or even sacred places, the reverence and rapture members of the Church of Jesus Christ of Latter-day Saints in Winnipeg showed for Nelson was hard for me to relate to. But it was still moving to see how much his visit meant to them.

Now I just need to get used to not calling them Mormons.