Churches and the Quebec Mosque Killings: "Silence Has Consequences" 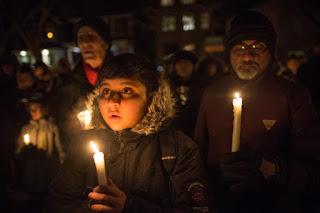 Three days should be long enough, I thought, to see how many church groups had posted statements or prayers about the terrible murders in the Quebec City mosque.

So I went online, checking out the home pages of national church bodies. I visited 20 websites; eight groups had posted calls to prayer or expressions of solidarity and concern; 12 had not.

I posted my findings on Facebook. “Canadian churches say they want to be relevant to society, that they want Canadians to know they care about a hurting world,” I wrote. “So, three days after the terrible murders of Muslims in Quebec City, how are they doing?”

I then went on to list my findings, naming the groups that had mentioned it—and those that hadn’t.

(I also checked other faith groups;  a couple of  national Jewish websites condemned the attack, but I found nothing on Hindu, Buddhist or Sikh websites—groups that, admittedly, have less of a national presence.)

Immediately, some people protested. “A website isn’t the only way to be relevant and show concern for hurting people,” said one.

“You don’t know if an e-mail or phone call was made,” said another. “Maybe they wanted to keep it private and personal.”

Others noted that some church groups aren’t really very tech-savvy, don’t update their websites very often, or might have complicated layers of approvals before they can post anything like this.

All valid points—to an extent. Some groups do take longer than others to make decisions. And just because nothing is mentioned on a national website doesn’t mean members weren’t individually expressing their concern. And statements on websites are not the only way churches can show they are relevant.

But at a time like this, with so many dead and a nation in shock, that seems to be the minimum any faith group could do, and as quickly as possible.

Why? One reason is because that’s where most people today look for information—online. This is especially true for younger people, who don’t tend to read printed denominational magazines.

Posting something on a website is also a way to tell those who are grieving that they aren’t alone. Not saying anything says the opposite: “We don’t care.”

Finally, a posted statement clearly tells anyone who sees it that hate of any kind isn’t welcome here.

And that, in the end, might be the most important reason posting a statement. One thing that was emphasized again and again following the murders is that people of goodwill and good hearts need to speak up for those who live in fear because of their race or religion.

That was the message delivered by Liberal Member of Parliament Joel Lightbound, who represents the riding where the killings occurred.

In a moving speech in the House of Commons, he apologized to Muslims in Quebec City “for having observed stigmatization, ostracization over the past years.”

He had “seen the mistrust, the fear, the hatred among my peers,” he said, but had not “done enough” to counter it.

Silence, he concluded, “also has consequences.”

One person who knows that only too well is Winnipegger Shahina Siddiqui. In an article on the CBC Manitoba website after the killings, she noted that the seeds of the murders “were sown and nurtured by deliberate campaigns to foster Islamophobia.”

For a long time, she said, “language that dehumanized Muslims and demonized Islam was creeping into our discourse . . . and being accepted uncritically as truth by society at large.”

This point was reinforced by Andrew Coyne, a columnist for the National Post. While we shouldn’t try to censor speech, he wrote, that doesn’t mean “we should not govern our own.”

“We are all of us engaged every day in the construction of a moral order: By our accumulated individual examples, the words we use, the acts we condone, we can make it one that encourages decency and compassion towards others, or the reverse. This is particularly true of those in positions of leadership, political or other.”

“Other,” in my mind, includes faith groups. If, God forbid, anything like this should happen again in Canada, I hope more of them are quicker off the mark in speaking up for the kind of Canada we all want to live in.
Posted by JDL at 6:02 PM No comments:

Short Term Missions Trips, or What's in it for the Leper? 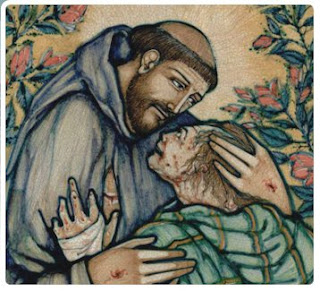 If it’s winter, it must be time for short term mission and service trips.

A quick search online shows that groups of Winnipeggers are heading out from churches and schools to places like Mexico, Uganda, the Dominican Republic, Ecuador, Bolivia and Guatemala.

(Funny how God seems to call Canadian Christians to southern climes in winter, isn’t it?)

Each trip can cost participants thousands of dollars, much of it fundraised. In the evangelical church world, many are undertaken by youth groups.

Service trips by doctors, nurses, dentists or other trained professionals can make a good contribution. But what about other kinds of trips?

Adds Daren Carlson, President of Training Leaders International: “I have seen with my own eyes or know of houses in Latin America that have been painted 20 times by 20 different short-term teams; fake orphanages in Uganda erected to get Westerners to give money . . . teams who build houses that never get used.”

Short-term missions, he says are “fraught with problems, and many wish such trips did not exist, at least in the common form today.”

Many of the short term mission and service trip leaders I talk to agree that the money might be better spent providing jobs for local people. But what about the effect on the participants—the lives changed by the trip?

No doubt, that can happen. But for most, the effect doesn’t appear to be as long-lasting as hoped.

Research a few years ago by Kurt Ver Beek of Calvin College in the U.S. found there were, in fact, few long-term life changes in the lives of Christian teens following their mission trips—no increases in giving, prayer or spirituality.

But even if some lives are changed, it prompts another question: Is it morally right for people in Canada to use poor people as a means of personal and spiritual transformation?

That was the issue raised last year by American pastor Hugh Hollowell, who operates a ministry for homeless people in Raleigh, North Carolina.

In a blog post, Hollowell wrote about receiving a fundraising letter from a young person wanting money for a short term mission trip to South America.

The key “selling point” in the letter was how the trip would “change the lives of the teenagers that go on this trip.”

When he read it, Hollowell thought back to another encounter between a wealthy missionary and a poor person, many centuries ago: The meeting between St. Francis of Assisi and the leper.

In the story, Francis—a product of wealth and privilege—was riding his horse near Assisi when he came across the leper.

For Francis, the experience was life-changing, setting him on a course of helping the poor. But what about the leper? He got money and a kiss—neither of which he asked for, Hollowell noted. What he mostly got, said Hollowell, was a chance to play a nameless bit part in the inspirational story of St. Francis.

No doubt, some trips do very good things. But unless participants and leaders are very careful, they can also cause problems and challenges for the very people they want to help.

Plus, the trips can put them on morally shaky ground. Will the people they meet just be nameless faces in Facebook selfies and church basement Power Point presentations? Or will they be seen as real people who deserve respect and dignity as human beings?

Those are tough questions that require an answer—before boarding the plane.

“Let me tell you the truest thing I know,” said Hollowell. “The economically poor do not exist to be agents of your transformation. They are not props in the story of you. And if you don’t have a really good answer to the question, ‘What’s in it for the leper?’ I wish you would stay home.”

Image above: St. Francis and the leper.
Posted by JDL at 8:50 AM No comments: