May 2-3 Symposium in Winnipeg to Explore Past, Present and Future of Canadian Christian Journalism 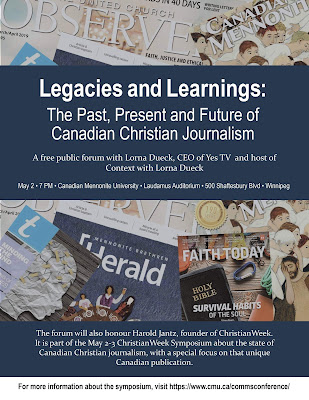 What was the state of Christian journalism at the turn of the millennium? What is it like today? What will happen to it in the future?

Those are questions that will be explored the Legacies and Learnings: A ChristianWeek Symposium, May 2-3 at Canadian Mennonite University in Winnipeg.

During the Symposium, speakers and panelists will discuss the role played by ChristianWeek, a newspaper that existed in print from 1987-2014, in reporting about the church in Canada during that time; the state of Christian journalism today; and the landscape facing Christian journalists and communicators in the future.

Lorna Dueck, well-known Christian broadcaster and commentator, CEO of Yes TV and host of Context with Lorna Dueck, speaking on the topic: Legacies and Learnings: Considering the Past, Present, and Future of Faith-based Media in Canada.

Gerry Bowler, a former professor of history at the University of Manitoba, speaking on the topic The Curious Case of ChristianWeek: A Brief History of a Medium that Mattered

And Sarah Wilkins-Laflamme, assistant professor of sociology at the University of Waterloo, addressing the issue of the future of faith in Canada through the topic None of the Above: Having No Religion in Canada.

Members of Canadian Church Press and the Anglican Editors Association will be holding their conventions in conjunction with the Symposium.

"During its time in print, ChristianWeek made an important contribution to the church in Canada, reporting the good and the bad, always seeking to provide an honest look at how God was working in this country," says former editor Doug Koop and one of the Symposium's organizers.

"ChristianWeek still exists today online, and is still a window on faith in Canada. The question facing all of us is, what's the best way for it, and for other church publications and communicators, to be that window in the future? That's what we want to explore together."

The Symposium starts May 2, 7 PM with an open public forum with keynote speaker Lorna Dueck, and continues all day, May 3, at CMU, 500 Shaftesbury Blvd., Winnipeg.

The Symposium is made possible by support from Canadian Mennonite University, ChristianWeek and individual supporters across Canada.

Cost of the Symposium is $75 by April 15 ($85 after), including lunch on May 3 and breaks. Click here for registration information.
Posted by JDL at 6:48 PM No comments: 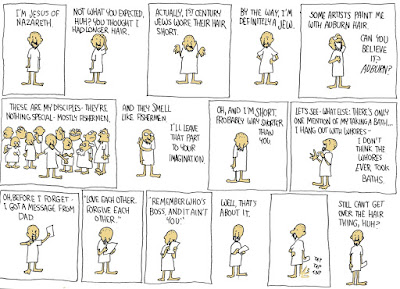 On March 16 my regular Winnipeg Free Press column featured Man Martin, 59, the artist behind the religiously-themed Man Overboard comic. Since I couldn’t share everything he told me in those few words, here’s the transcript of my interview—replete with panels from the comic. Enjoy!

Tell me about yourself.

I am a novelist and high school English teacher living in Atlanta, Georgia.

Are you a churchgoer?

Yes.  I like to call myself a “practicing Christian,” which implies that I still haven’t gotten it right, but I’m not done trying.

How important is faith to you?

It’s becoming more important as I age; nevertheless, I’ll confess my faith is about as weak as a reed. I struggle with it, and anticipate I'll keep on struggling, which is why it so often forms a theme in my cartoons.

What's your background as a cartoonist?

I realized my childhood ambition to be a syndicated cartoonist in the 1980s when Universal Press picked up my comic strip “Sibling Revelry.”  It appeared in a grand total of 36 papers until its demise.

Following that, I turned to writing fiction. It was decades before I began cartooning again. 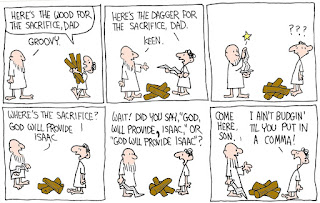 When did you start Man Overboard?

About three years ago.  Originally, it was titled, “Inkwell Forest,” and was to be a conventional fairy-tale themed comic strip.

When it finally sank in that the newspaper comic strip was heading the way of the dodo and the northern white rhino, I cut loose and began drawing about whatever interested me instead of worrying about trying to be commercial.

Why did you start the comic?

For years I’d been having intermittent dreams about drawing a comic strip, and would wake up thinking, “Maybe it’s time to do another strip.”  Then I’d say, “Nah, I don’t want to do that.” Finally, I acted on my dreams and it’s been a delightful experience. 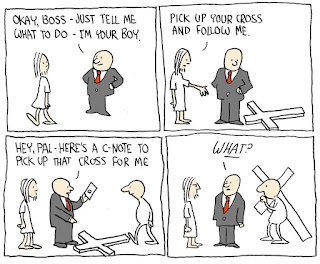 What or who are your influences for the comic?

My mother always said I drew like James Thurber because most of the time my characters don’t have hair and ears seem more like an optional accessory. So I’d have to say Thurber too.

Do you do it for fun or to make money off it?

I just want to have fun and hopefully provide fun for others. I released a book, “Not Easy Being God,” last year, but so far that’s been my only attempt to monetize.

The strip is available for free on Facebook, my blog (manmartin.blogspot.com), and through email subscription. (Text OVERBOARD to 22828.)

It's more than a hobby and less than a career.  It's something I do.

What is the response? 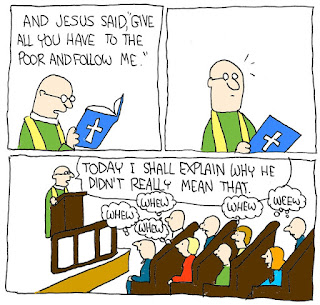 You live if in the Bible Belt, then darn close to it. They take Christianity seriously down there. What's the reaction to the way you portray God, Jesus, the church and Christianity?

I live on the veritable buckle of the Bible Belt; oddly, though, no one has ever taken offense at my religious-themed cartoons.

When they have taken offense, it’s been when I’ve attempted political humor.

Though sometimes I hurt others’ sensibilities, I never set out to, and it’s painful to get an email or message that such and such a cartoon rubbed someone the wrong way.

Nevertheless, the only audience I’m beholden to is myself, and whatever strikes me as interesting, funny, or worth commenting on Tuesday morning is likely to show up in a cartoon on Wednesday.

Sometimes I may offend the reader, and for that, I apologize in advance, but if I have to avoid certain subjects for fear of crossing the line, then it just isn’t fun for me, and if it isn’t fun, what’s the point. 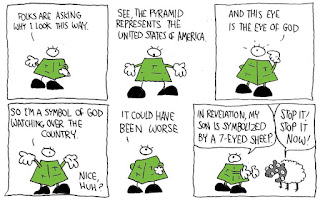 How did you come up with your image of God in the comic? (A play on the eye and pyramid in U.S. currency)

I chose it, because as images of God go, it is by far the weirdest and most preposterous. Showing God as a white guy with a beard isn’t nearly as goofy as showing Him as a one-eyed pyramid.  And when you’re a cartoonist, goofy trumps all.

Do people criticize you for how you draw God? Or Jesus?

Again, no one’s found fault, as far as I know, with the way I depict God, Mary, and Jesus. Indeed, some of my most loyal fans are clergy. I guess if you get the joke and see it’s all in fun, you stop and read.  If not, you skip over it. 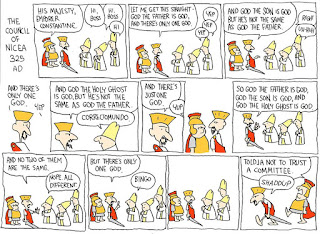 Your comic assumes some knowledge of Christianity, biblical literacy, theology and history. Is that a challenge today when so few people know the Bible?

Maybe this is what accounts for peoples’ fondness for the cartoon. In an era when organized religion is on the decline, it’s reassuring for people of faith to see cartoons about subject matter uniquely familiar to them. 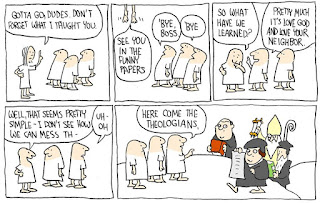 You are also critical of the church. Why? And what's the reaction?

For me, one of the great themes of Christianity is the astonishing way people just don’t get it.  Jesus can explain something in words of one syllable to his disciples, and they’re all standing around in slack-jawed stupefaction as they try to figure out what he meant.

Right from the get-go, the early church began to break into schisms arguing about such earth-shaking trivia as whether bread can be flesh or if Mary was a virgin only when she conceived Jesus, or if she kept on being a virgin after that.

This unfortunate tendency of losing sight of the main point is not reserved to theologians, disciples, and other crackpots; every Sunday, I am reminded there are two laws—only two—love God and love your neighbor, and every Sunday I’m back in church needing forgiveness all over again because I couldn’t do those two simple things. 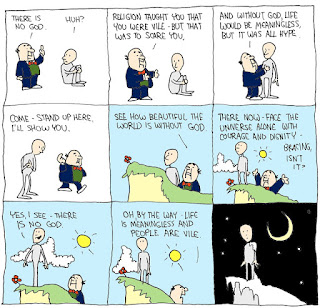 You also take on consumerism, the environment, and ultimate meaning. Why?

Because those things are interesting to me and rife with absurdity.  The funniest material is mined from the most serious topics. As Flannery O’Connor said, “things are funny because they’re terrible, and terrible because they’re funny.”

Where do you get your ideas for religious ideas from?

Same place everyone gets their religious ideas: personal experience, worship, scripture. The only difference is that in my case, religious ideas come out funny.

What, for you, is the role of humour and comics in communicating about faith?

I'm a little uncomfortable with the idea humor has a "role" in anything.  It seems to make humor subservient to some other purpose.  Humor needs no such excuse.  If it makes you laugh, grimace, or grunt, that's good enough for me.  Humor brings delight, what else would we ask from it?  It just so happens, our notions about God and spirituality are a wonderful source of humorous material.

Is there any topic you won't touch? (In the religious sphere.)

Telling a cartoonist there's a topic he can't touch is like wearing a sign that says, "Don't kick me."  As soon as I know something is out of bounds, I'm bound to go there.

How does the polarized political climate in the U.S. today affect your work? (

Sometimes I dip my toe into political humor, usually not very adeptly and sometimes to the actual pain of friends and loved ones.

If my answer is "Nothing," I won't be able to meet her gaze. So from time to time, come hell or high water, I will do political humor.  Again, it's not my best work.  But the target is too big and juicy. 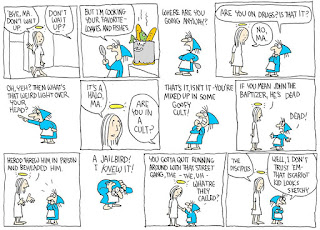